What is Desktop Virtualization? 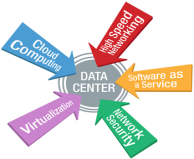 Desktop Virtualization is a type of virtualization that allows access to a desktop Operating System environment on a remote virtualization platform such as Hyper-V, XenServer or VSphere. Instead of hosting the desktop on the hard drive of a physical computer, the virtualized desktop is hosted on a remote server where each end user’s data is stored and protected. It is ideal for a company that requires multiple users to access their resources from various locations and from different types of devices. Microsoft and Citrix desktop virtualization platforms allow access from non-PC devices such as tablets, smartphones and thin client devices regardless of their location and on low bandwidth networks.

There are three major types of desktop virtualization:

Desktop virtualization has a number of benefits which makes it a popular technology for both individuals and businesses.

As a highly-skilled technology company providing various IT consulting services and whole solutions, LegaSystems can help you and your company benefit from desktop visualization and various other IT services. Ask us how you can utilize the power of Desktop Virtualization technology to improve your daily operations.